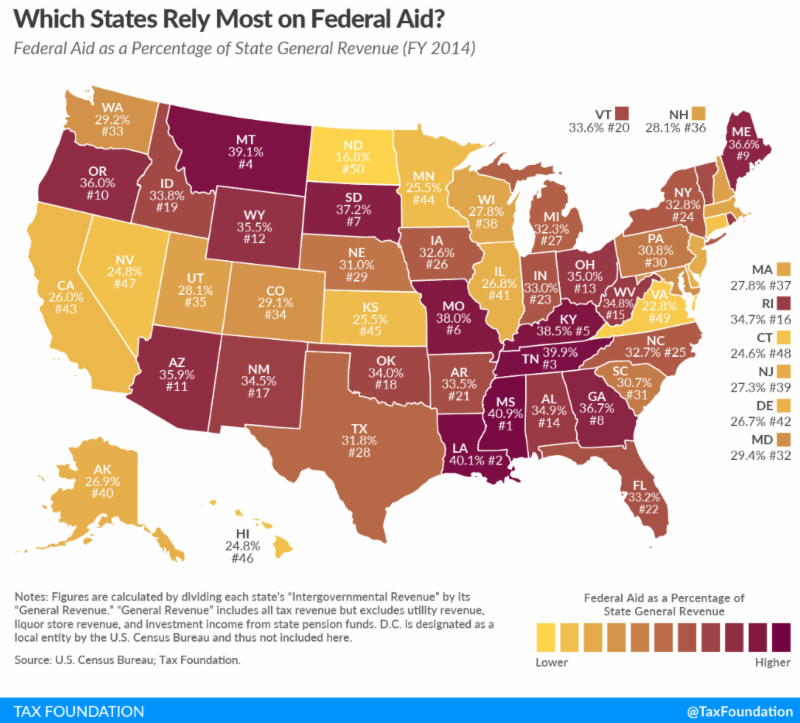 State-levied taxes are typically the most visible source of state government revenues, but they are not the only source. The Tax Foundation reported last week that state governments "also receive a significant amount of assistance from the federal government in the form of federal grants-in-aid." According to the Foundation, such aid takes many forms, including federal Medicaid payments, education funding, support for infrastructure, housing grants and more. "Federal grants-in-aid to state and local governments have reached $600 billion per year, with Medicaid by far the largest (and most rapidly growing) component." The top recipient of federal aid in FY 2014 was Mississippi, which relied on federal assistance for 40.9% of its revenue. Other states heavily reliant on federal assistance include Louisiana (40.1%), Tennessee (39.9%), Montana (39.1%), and Kentucky (38.5%). On the other end of the spectrum are states like North Dakota (16.8%), Virginia (22.8%), Connecticut (24.6%), Nevada (24.8%), and Hawaii (24.8%). Nebraska is No. 29 (22nd least dependent on federal funding) in the study, a three-spot improvement from the Foundation's 2016 ranking. Still, 31% of Nebraska's state government general revenue came from federal aid in FY 2014, according to the study. Meanwhile, federal debt has increased from roughly half a trillion dollars 40 years ago to nearly $20 trillion today.